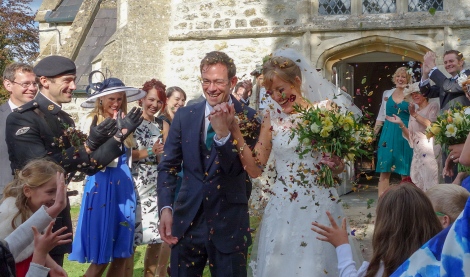 Hugh and Kirsty charge out of the church after their wedding in Coulston, Wiltshire, England.

On passage, we listen to a series of children’s stories about a rotter named “Mr. Gum.”  One of his sidekicks, Billy William the Third, has a penchant for saying words in a “funty” way.  So, for example, England becomes “Engerland.”  Having achieved that landfall a few days ago, we’ve taken to giddily repeating that we’ve made “Engerland!”

But it wasn’t an easy trip.

We had been holed up in Cuxhaven, Germany, for nine days, waiting for the weather to change. It finally did on September 9, and we saw more than three days of easterly winds forecasted for the North Sea between Cuxhaven, in the North Sea’s southeast corner, and Dover, in the south west.  So at about mid-day, after the strong current in the Elbe River had turned fair, we untied Leander and headed out to sea.

It took us about three hours heading due north to clear the remainder of the Elbe’s delta, and we then took a left hand turn toward England.  We intended to see how the winds and sea treated us.  If it all went well, we hoped to clear all the way to Dover, some 350 miles away. 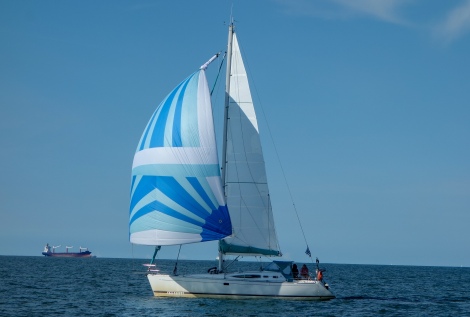 New friends Armand and Francoise, French sailors from Brittany, aboard Jezequel, departing Cuxhaven with us.

The first 24 hours were great.  The wind was just off of our back quarter, and so we untied the spinnaker pole for the first time in years, and set up the sails wing-and-wing.  The sails filled nicely, and Leander was making good time as the sun sank.  The challenge in this part of the North Sea is the shipping, and so our overnight watches were punctuated with frequent periods of intense concentration (panic?) as we worked to ensure that we would not collide ships coming to and from the German and then the Dutch coasts.

By noon of the second day, we turned the corner at Texel, at the Netherlands’ northwest corner, and headed southeast towards Dover.  After we made the turn, the wind was great!  It was just aft of the beam, a position that Leander really likes, as does her crew.  We were making great time, and saw that we would be able to make Dover long before we would lose the strong easterlies.  We re-set the sails, and stowed away the spinnaker pole.

But as we picked up speed, we began to think.  It was now September 10.  We had long ago circled September 12 on our calendar.  This was the day when Sima’s good friend Hugh Lloyd-Jukes was getting married in the southwest of England.  Hugh and Sima had worked together in London years earlier, and Hugh had been an ideal boat guest when he sailed with us during our first year out.  (We wrote about Hugh’s visit here Welcome to Jamaica and here A Cuba no vamos!)  We had told Hugh some time ago that we would try to make it, but having little control over the wind and weather, we could not at all guarantee our attendance.  As we sat in Cuxhaven watching the days pass, we came to the conclusion that we would not be able to go.  And even with the good winds we were now enjoying, we would not get to Dover before early Saturday morning, and that would not be enough time to find a rental car, gather needed clothing, and get out to the other side of England before the wedding.

As the sun began to set on Thursday, we revisited our pace, the calendar, and possible landfalls.  We realized that if we didn’t try to get all the way to Dover, we could get to Lowestoft or Harwich, further up the English coast, by sometime Friday afternoon.  We began to talk about it.  Shouldn’t we take advantage of these winds for as long as they lasted, and press on to Dover?  Would we be asking too much of ourselves to try to push through three days and two nights at sea, only then to get in a car and drive clear across England?  And would Hugh and Kirsty be OK with four additional and last-minute wedding guests?

We decided to go to the wedding.  Then figured it made no sense.  Then decided we should go anyway.  And so an hour later, as the sun began to set, and we had arrived at a safe place to cross the shipping lanes, we turned due west toward Lowestoft.  In the encroaching darkness, we unpacked and reset the spinnaker pole, and Leander headed off on her new course.

But what was this?!  Gone was the comfortable beam reach, replaced with a sloppy sail directly downwind.  Leander had a tough time biting into the seas, and, in some of the wave sets, she was rolling to such a degree that she was putting BOTH rails in the water at the extreme ends. Sima,down below at the galley, cried out in protest.  Will this be all night?

Unfortunately, it was!  As we got away from the coast, the seas got rougher, and with nothing but a wind from behind, Leander had no meaningful traction in the rolling and roiling seas.

We quickly realized that another problem was our speed.  Leander was soon doing 8 and 9 knots, and so our projected late-morning arrival changed to the pre-dawn hours.  (We could have shortened sail, but this would have made the boat’s motion even more uncomfortable.)  As Lowestoft is surrounded by somewhat treacherous and frequently shifting sandbanks, this would not do.

So we modified our course once again, and headed further south down the coast, to Harwich.  That course would put us in at around Noon.

It was a bumpy night, and both of us, who thought that we had now gained our sea legs, found that we had not. I took the watch from 6 p.m. to Midnight, and Sima took it from midnight to daybreak.  The kids woke with the sun, and it was hard work for Sima to get them dressed and fed.  The kids, mind you, seemed to have no notice of the sea state, and were up and about as if the seas were as flat as a pancake.

We closed on Harwich at about Noon, and we were both very very happy as we entered into the protected waters inside of the breakwater.  This had been one of our more difficult nights.

We took a berth at Shotley Point Marina, shook off the cobwebs, and began to make arrangements for the wedding.  First a call to Hugh.  Would we still be welcome?  You bet!  Then a rental car.  Colin, on the marina staff at Shotley Point, was invaluable, arranging for a ride into town and the use of a phone to make calls.

The trip was supposed to take us about 3.5 hours, but that estimate wasn’t even close.  Traffic accidents, heavy rain, and roads over-saturated with cars and trucks turned it into a 7-hour journey, 8 hours including our stop at a department store to address some clothing needs. As we neared Coulston, the site of the wedding, the motorways changed to two-lane roads, and then, at the end, one lane paths.  It was some of the most enchanting countryside that we have ever seen, but it was not conducive to making up time.

The roads in rural England aren’t built for high speed.

When we finally thought we were close, another 30 minutes was added on to our trip when we were re-routed because of weekend military exercises!

As soon as we arrived, however, we knew that the extra effort had been worth it.  It was a beautiful wedding. Hugh and Kirsty got married at small 12th century Norman church in Coulston, and the persistent rains gave way to bright sunshine.  The day turned out to be stunning.

Presto! Two boaties become legit wedding guests!   We rummaged through our lockers and thenwent on a quick shopping spree to find clothes suitable enough to allow us to fit in at the wedding.

Aylin got a new dress for the wedding.

We found a B&B in a nearby town to crash in after the wedding, and it provided a comfortable end to our long day.

We made the short drive back to Coulston the next morning, where Hugh and Kirsty had arranged a long hike through the surrounding woods and fields to a nearby pub for a good English brunch.  The scenery was great, and it gave us a chance to get better acquainted with some of Hugh’s and Kirsty’s other friends. 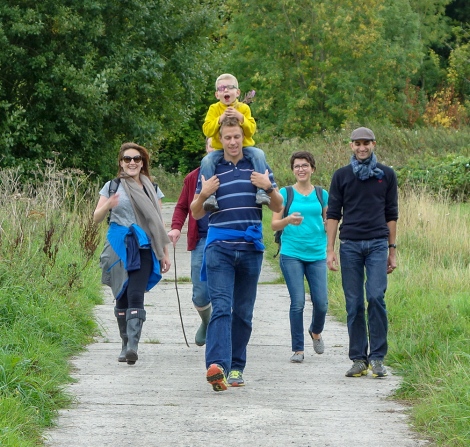 An excited Alexander gets a ride from Adrian, one of Hugh’s friends from school.

Alexander and Daniel, passing by an old English home. 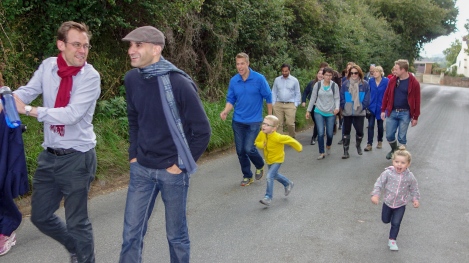 Heading home after a filling brunch. 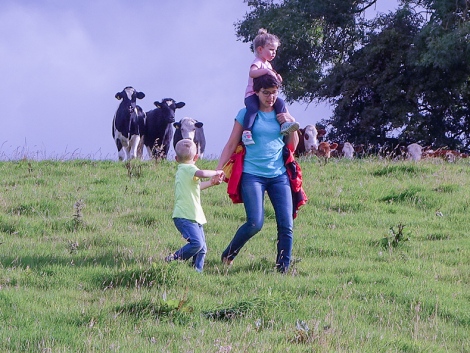 “Mom, I think we’re being followed!”

The newlyweds on their way home.

We got back in the car and set off for home in the late afternoon on Sunday.  We passed by Stonehenge, so took a moment to explore it.

Paul and Alexander at Stonehenge.

The stones were much bigger than we anticipated, and much larger than the standing stones we had seen in Orkney.

Aylin and Alexander were excited to see a fox out and about at dusk.

We got back to Leander late on Sunday, having thoroughly enjoyed the wedding, catching up with Hugh, getting to know Kirsty better, and meeting some of their other friends.  It had been a wonderful weekend.

One response to ““ENGERLAND” AND THE WEDDING”