Sima and her entourage sailing through Pirate Alley

Sima grew up in Istanbul.  She came to the U.S. to attend Harvard College and liked Boston so much that she stayed after graduation.  Considering law school for her graduate studies, she first worked at a big multi-national law firm as a paralegal, where she decided not to become a lawyer.  However the experience was not for naught, as it was also in this same firm that she met Paul.

After deciding not to pursue a career in the legal world, she decided that management consulting is where her interests lay and joined a Boston-based boutique strategy consulting firm, and started working in their London offices.  She liked living in London, although not what it did to her finances.  It was here that she took her first sailing lesson, on the Thames, sailing from East London to Greenwich on a spectacular spring day.

On the boat, Sima found that she liked to cook and bake, and soon became quite skilled at both.  She loved experimenting with new foods and local produce, and contriving of ways to keep produce fresh during long passages.  She was also the boat’s computer specialist, and learned to solve problems that, in her former life, she would have referred to her friends in the IT department.

Canvas work also fell into her purview, and she learned to perform sail repairs at sea.  And she also liked working with rope.  She has a certain fondness for splicing three strand rope. 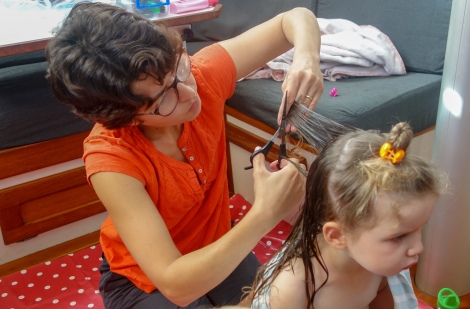 Her best skill, however, began to develop about three years into the trip, when the kids started coming.  Sima learned to balance all of the above tasks with being a supermom.  Perhaps one of the most memorable moments aboard came when Sima was helming during a bumpy run, but could only hold the wheel with one hand, as she was holding a breast-feeding baby on her hip with the other.

One response to “Sima”