“The Waiting Place . . . . for people just waiting . . .Waiting for the fish to bite or waiting for wind to fly a kite or waiting around for Friday night or waiting perhaps, for their Uncle Jake or a pot to boil, or a Better Break or a string of pearls, or a pair of pants or a wig with curls, or Another Chance.  Everyone is just waiting.”

Including us!  Boy, that Dr. Suess can capture a mood, here, from from his book, “Oh, the Places You’ll Go.”  We ARE in a waiting place, waiting for the wind and a better break.  And everyone else is here with us, just waiting, to go west.

We came to Cuxhaven on Sunday, August 30.  We spent two days getting a sail repaired, and have been sitting here ever since waiting for the winds to change direction, as they are currently strong from the west and kicking up a mess in the North Sea.

Sima and Aylin wave from Leander, at berth in Cuxhaven

It hasn’t been a bad place to be holed up.  Cuxhaven is big enough to have several main thoroughfares with scores of shops, and a huge grocery store, but not so big that you cannot easily walk about the city.

Near Cuxhaven’s waterfront, an old VW, the people’s car of Germany.

We took a day to go into Hamburg, Germany’s second largest city, which grew prosperous as a prominent member of the Hanseatic League, a confederation of trading cities.  We visited the remnants of St. Nicholas Cathedral, and its associated museum, and found them to be particularly moving.  Hamburg suffered from devastating firebombing in WW II, and the shell of the once-magnificent structure serves as a reminder of, and memorial to, the 40,000 plus who lost their lives.

Our trip to Hamburg was not all sightseeing. When we had been in Aro, Denmark, we helped another boat raft up next to us, and met Peter Kaupke and his wife Martina, aboard Alzavola.  Peter noticed Alexander’s eyeglasses and asked some questions.  Then he asked some more. He learned that Alexander wears a patch for treatment of amblyopia.

We noticed from the probing nature of his questions that he knew something about Alexander’s condition.  So we probed a bit ourselves (and read some after our meeting), and learned that Peter (or, Dr. Kaupke) is one of the foremost authorities on the subject in Germany, if not in all of Europe.  We also learned that, as a fellow sailor, Peter started a program for other cruisers to help treat eye problems in the far-flung reaches of the globe. His program operates the Hamburg Institute of Research, Training and Therapy, whose motto is “Save Children’s Sight – For A Better Chance In Life.”  Peter outfits cruisers with a rather complex and quite expensive eye testing kit and trains them to use it, which they then use to test children’s eyesight in places where basic medical care is otherwise not available. (Peter seeks help in testing children in remote areas, and so if you are a cruiser reading this, we invite you to contact him.)

Peter invited us to see him in his office in Hamburg, an offer that we could not refuse.

In Hamburg, Peter and his staff spent a considerable amount of time examining and testing Alexander. While we waited for eye drops to take effect -children need eye drops to stabilize the eye for precise measuring- Peter took us out to a leisurely lunch at a nearby restaurant; and that followed with an hour of Peter answering our many questions back in his office.  (Alexander is absolutely fine. His right eye is stronger than his left, but with glasses, both eyes correct to near perfect vision.  That said, his brain needs to be trained to trust the now-corrected left eye, which will take a little while to accomplish.)  Peter loaded us up with extra patches, a testing kit, and access to some online training exercises.  We left Peter’s office with a much deeper understanding of Alexander’s condition and how best to treat it.

We left Peter and went back on our tour of Hamburg.  The Beatles got their start here, and so we wandered down the Grosse Frieheit to see the area where they got they played, cranking out six-hour nightly stints that, they later claimed, perfected their skills. The street is now, as it was then, lined with strip clubs, sex shops, and tawdry bars. One can only imagine what it must have been like in full swing on a Saturday night.

With Aylin in his arms, Paul ambles down the Grosse Frieheit, in Hamburg.

We took a late rush-hour train home, and could not believe how absolutely quiet it was aboard.  Although the car was packed to standing room only, you could have heard a pin drop.  You could also hear our children, who were making their usual racket of singing and complaining and, every now and then, crying. Or sometimes getting up to try and kick the chair of the fellow in front or the woman in back.  Or to throw a ball or to chase after an escaped toy.  And it DID seem that we were getting more cold stares than usual.

It wasn’t until the end of the long ride that we cottoned on!  When the train arrived at the last stop in Cuxhaven, we were now one of a few remaining passengers on board.  As we got off, we happened to look back at the train, and saw our mistake.  The car bore a giant sign that read, “RUHE WAGEN”  — the Quiet Car!  Es tut mir lied!!! 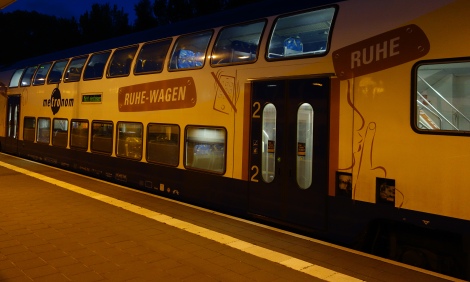 The”Ruhe Wagen” on the return train from Hamburg.

Back in Cuxhaven, we spent several more days doing boat projects, getting some personal work done, and exploring the town.

The dikes that run along the waterfront protect Cuxhaven from tidal surges and flooding on the Elbe.

We also have the good fortune to be docked a stone’s throw away from our good friends Ginger and Dick Stevenson on s/v Alchemy out of Larchmont, NY.  We have really enjoyed the additional time spent with them. 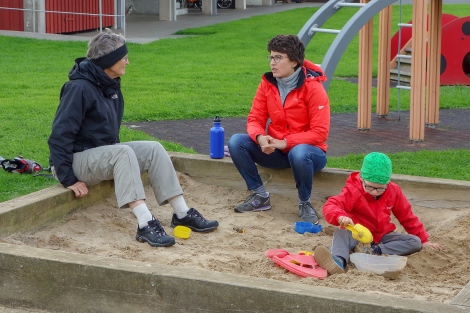 Ginger and Sima chat while Alexander plays in the sand. 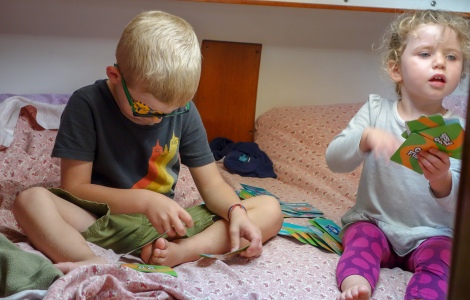 Passing the time with a game of cards — here, Go Fish.

We’ll get moving soon, and will probably be able to pull off another long run.  We’ll see.

The kids rest up for when we start to get moving.

One response to “Cuxhaven, Germany: The Waiting Place”