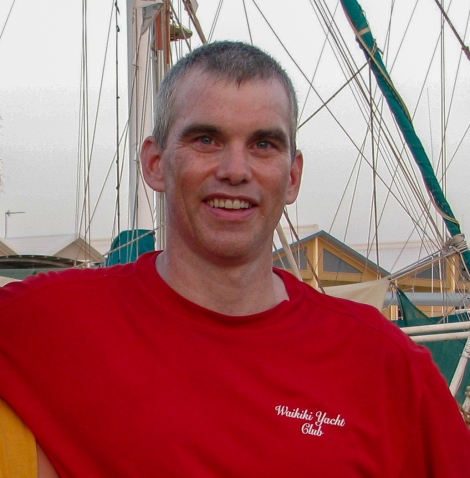 Paul grew up in a family of nine in Lynn, Massachusetts.  Although Lynn is on the Atlantic Ocean, and Paul spent many summer days at the beach, he never became a boater.  (Or a swimmer, for that matter.)  “We played and ran in the sand, and in the surf, but never swam distances.  And I can count on one hand the number of times that I was on a boat on the ocean, with a couple of fingers to spare.  And on most of those occasions I was seasick, and sometimes dreadfully so.  I did, however, learn how to sail small Sunfish sailboats on a flat-calm pond at Boy Scout camp, and eventually became an instructor.”

Paul spent a year overseas living in Sweden in high school (and still speaks the language fluently), and then went to college at Princeton, where he played football and JV hockey.  He obtained a law degree at Boston University next, and then joined one of Boston’s biggest law firms, where he went on to become partner.

He interest in the sea began as learned more about his great, great, great grandfather, Alexander Robertson, who had been a warrant officer in the Royal Navy during the time of Nelson.  In 2002, when the tall ships swung through Boston on a global race, Paul hitched a ride as a crew member aboard one of them, the Europa, out of Rotterdam.  He sailed four days to Halifax.  It took one day to get his sea legs, but Paul then thoroughly enjoyed the rest of the trip.

Over the next several years, he took sailing lessons during the summer months at the Boston Harbor Sailing Club.  Going out on a boat on a boat after work or on weekends was a great release from the stress of corporate litigation.  This all culminated one day when he met his future wife, Sima, at an office ice cream party.  They soon after decided to get married, stop working for a “little while,” and go sailing.

Paul spent his time during the trip fixing things on the boat, figuring out where next to sail, wrestling with marine service personnel, and devising ways to keep Alexander and then Aylin from falling out of bed or otherwise hitting his head on the cabin sole.

His favorite places?  Vanuatu, in the South Pacific.  Orkney.  Smogen, in Sweden.

One response to “Paul”