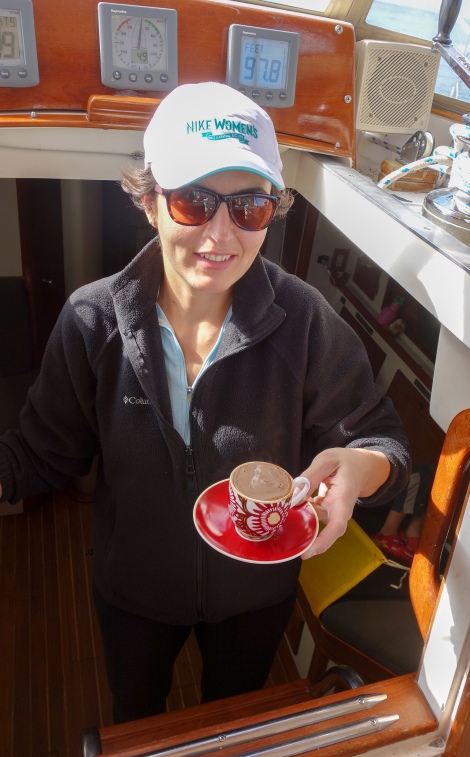 Dover to Dartmouth — was this a calm passage or what?! Sima took the luxury of making herself a filled-to-the-brim cup of Turkish coffee.

On September 19, we had several days of light winds forecast, and so we pushed out of Dover and headed down the English Channel, on an overnight sail, bound for Weymouth, about 146 miles away, or another 50 miles or so further along, to Dartmouth, if the ship made good progress.

Farewell to Dover, and its famous white cliffs.

There were several fly-overs by military and coast guard planes, keeping a close eye on the channel in light of the migration issues on the French coast.

We DID make good progress, and this was one of our more pleasant passages.  We motored a lot, but it made for calm seas, for a change. Note Sima’s cup above, which did NOT runneth over!

We made Dartmouth at the end of the day on September 20.

A watch tower at the entrance to the River Dart.

Sima guides Leander up river while Alexander captures the scenery.

Darkness gathered as we tried to locate a supposed anchorage about three miles upriver, near a place called the “Anchor Stone.”  But we couldn’t find anything suitable at less than 50 feet of depth, which made no sense in the river’s strong current.  So we grabbed a mooring ball.  We moved to a floating dock the next day, where we pay $300/week for the luxury of tying up to a floating pontoon in the off-season with no access to land, no electricity, no water, and no Internet.  If we HAD found the anchorage, the folks here would still have charged us $150 a week for the pleasure of using their mud.  That’s the first time we’ve seen that.  Welcome to the South Coast of England, no doubt one of the most outrageous places in the world to cruise on a long-term basis!

The “Royalist,” a sail training ship, moves up the River Dart.

A late-night visit from a black-headed gull. (Really it is! They lose their black caps for the autumn.)

We’ll try to slip off today, September 24, to cross the English Channel to Brittany. The weather is not bad, with winds of 15-20 knots forecast for just off of the beam. It may be too that we’ll then have an immediate weather window to cross the Bay of Biscay, a three-day trip and one of the more challenging parts of of our return to the US.