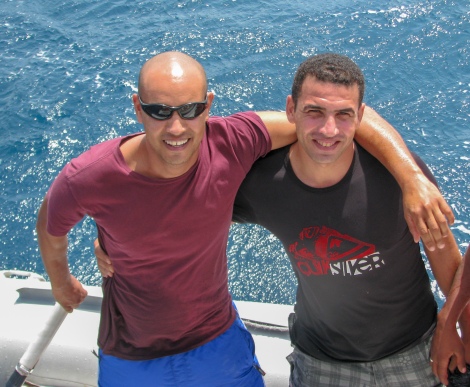 Hani, our Egyptian friend running the HEPCA boat (see below) had a smile — and a nature — that could light up a room.

The dolphins did come to dolphin reef, and we swim about while they were inside the reef.

It was, however, a complete circus. Commercial dive boats were in and out of the lagoon all day, each with a couple of motorized dinghies that zip a dozen snorkeled snorkelers to this part of the reef or the other.  This doesn’t exactly create a traffic jam, as the reef is so big with so much to see that it doesn’t feel crowded.  But you’re not alone either.

When the dolphins finally did arrive, surfacing gracefully as they lolled about in the protection of the reef, they were besieged. A motorized dinghy or two would circle about them, trying to plop the snorkelers into the water in their path, and then pick everyone from the water again when the dolphins moved away, to try again.

Dolphins swam slow laps for hours on end in dolphin reef. How slow did they go? That’s a snorkeler just behind them. Note the reef in background. Beyond that the sea is rough and nasty. Inside the reef we rest at ease. As do the dolphins  — that is, until they are chased by snorkelers.

Finally, the dolphins were left alone, and everyone had returned to their boats. We understand that they are sociable animals, and like people. But they also come into the lagoon to rest and sleep, and shut down their sonar, which takes energy to run. All these boats buzzing around can’t help that.

When we were back aboard, Sima saw them approach the boat, and was itching to go back in. So she did and, as Paul watched with the binoculars, Sima swam with them for a while, by herself. They didn’t seem to move away as they had when the large group was about. Paul soon followed, and we had about 20 minutes with them by ourselves. Until the next dinghy came buzzing in.  Vroom, vroom, vroom.  Splash splash splash.  Another dozen snorkelers plop in, and the dolphins move to avoid them.

So we swam back to Leander, stopping at a coral outcropping on the way back to say hello to the smaller fish.

But dolphins were not the highlight of our stay at Dolphin Reef!

Late one afternoon, a Zodiac approached, and a fellow named “Hani” introduced himself. A good-looking Egyptian with a fine command of English, he offered his hand in greeting. “Do you need anything?” he asked. “Any troubles? Is there anything I can do for you?”

Huh?  We’d been scammed enough in various parts of the world, and so our guard was up.  Hani quickly helped us take it down.

We invited him aboard, and spent some time chatting. It turned out that he was working on a nearby HEPCA (“Hurghada Environmental Protection and Conservation Agency”) boat that was moored nearby. It was chock full of researchers who were moving up and down the Red Sea, studying the status of whales and dolphins. Oh, how we ached to meet them and chat them up about what they knew and what they were doing. But we couldn’t well invite ourselves over, so we did the next best thing, and invited Hani and any guests he’d like to bring to come back for a sociable after his work was done for the day.

At about 7 p.m., Hani did come back, with two others. Did we want to come to dinner aboard the boat and meet the research crew?

We came aboard the HEPCA vessel at about 8 p.m. We had a wonderful dinner. Sima, who loves to cook, has perhaps become somewhat less enamored of doing it for days and weeks on end, especially with no fresh produce for about a week now, and was ecstatic about the opportunity to “eat out.” It was a great spread, highlighted by fried chicken, which we both ate.

Our hosts were wonderful. They were each from different academic institutions in Italy, Australia, Egypt, Luxembourg, and Switzerland, on loan to HEPCA. We learned that, despite Jacques Cousteau’s Red Sea legacy of copious work in the Red Sea, no such study has been done in the past. The researchers noted that they would be the first to track just what kind and what amount of whales and dolphins make the Red Sea their home. They walked us through their research room, an oversized cabin stuffed with computers, and described to us their methods.

Marina, the projects lead, took considerable time to tell us about the project in detail.  We learned that none of us were doing the dolphins any favors by swimming with them.  They come to these isolated reefs to sleep.  The slow, graceful laps they are doing are a form of shut-down mode.  The buzzing engines and splashing divers and snorkelers take them out of that mode. Populations are declining, they say, and the interference with their traditional sleeping grounds is one reason. One of our hosts, Maddalena, has written about the issue here: https://www.sciencemag.org/news/2018/04/swimming-dolphins-good-idea

While we listened and learned, the Egyptian staff on the boat made sure that there was a cold drink in our hands at all times.

Sima speaking with our HEPCA hosts.

We ended the night on their observation deck, lying flat on our backs watching the moonless, star-speckled sky, trading knowledge about the constellations we knew. 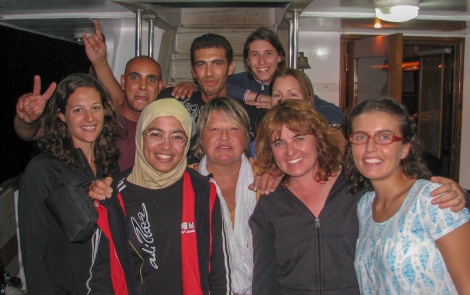 Amina far left. Hani next to her. Marina next to Sima.  And Maddalena at the top.

We got back to the boat late, and made ready for a departure the next day. It had been a wonderful evening.

Now we are en route to Port Ghalib, 100 miles north from Sataya Reef. We left yesterday at 4;00 p.m., and knocked off 70 miles in the first 12 hours with favorable winds behind us. But then the winds shifted, and we slowed to a knot and a half in a stiff headwind. Our ETA changed from 1 p.m. today to 6 a.m. the tomorrow morning! This is drag not only because it makes for uncomfortable seas, but also because we sought to get to Ghalib in time to see the U.S. play England in the World Cup, tonight at 8:30 p.m. local.

We had been hoping for a wind shift all morning. The forecasts are unreliable here, as one calls for the wind to be from the west, the other from the east. Mother nature has cooperated by sending it right down the pipe from the due north. A little to the right or a little to the left, and we could maybe put up a little sail and make some headway. Paul’s sister Cathy is providing additional data to us from the comfort of her home in New Hampshire, and that has helped. An hour ago, an alarm went off. It was the “WIND SHIFT” indicator on our autopilot, which tells us about sudden changes in wind direction. So this might be a good alarm! But the wind had shifted only a little bit at first. Paul stood in the cockpit, making like Carlton Fisk, waving his arms to the side, trying to blow the wind further fair. It worked, and Paul jumped about on deck, fists pumping high. Yess! Yahoooo!!

The wind has veered well to the northeast, and the boat speed climbed from two to three and then four knots. And now six knots as we hoisted bigger sails. They fill, Leander heels over, and pounds through the waves. If this can hold for four more hours, we’ll be in. We’ll see.