Welcome to Sailing Leander.  We are a family of four —  Paul Robertson, Sima Baran, and children Alexander and Aylin.  This is the blog that we kept during a nine-year circumnavigation of the globe by sailboat between 2007 and 2016.

Neither of us were old sea salts when we started, to say the least.  We had been careful to gain a fair amount of experience in the year before we left, by bare-boating once in the tropics,  helping to deliver a boat from the Caribbean to Rhode Island, attending classes on engine repair and safety at sea, and obtaining appropriate sailing certifications through the local sailing club.  But Leander was the first boat that we ever owned, and the day in October 2007 that we departed the harbor near Marblehead, MA, was just the second time that we sailed her. 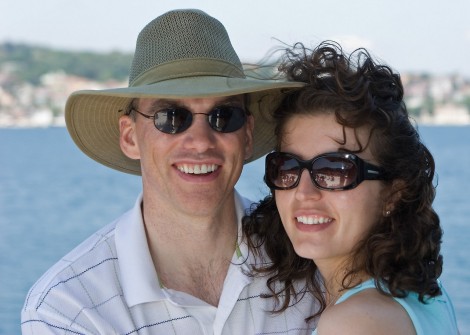 Paul and Sima in 2007 shortly before setting sail

This blog provides details as to how we made that work, going from landlubbers to experienced sailors in a relatively short-period of time.  Our journal is not, however, a how-to manual on sailboat repairs and maintenance, a primer on how to find a suitable boat and the best gear, nor a passage-making and anchorage guide.  We certainly touch on those topics, but you can find more targeted sources for those topics elsewhere.  Our focus is instead on the life itself.  In the end, although it’s true that you’ll find stories about refrigeration and pre-season boat prep, there is quite a bit more about such things as the beauty of Orcadian light or the friendliness of the Ni-Vanuatu

Our goal was never to visit as many places as possible, but to stay for long periods of time within a limited number of disparate cultures to gain insight into what life is like in other places on the planet.  Passage-making was, at times, extremely difficult for us — more than once we wondered about the soundness of our efforts. 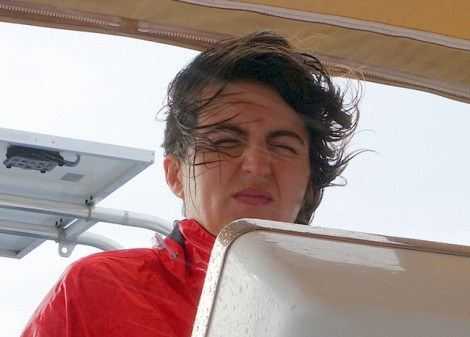 Sima at the helm in a gale.

But the rewards were sublime.  We understood that we would never ascend to the status of “locals” anywhere, but over time we graduated from tourists to visitors, and we learned tremendously from the relationships that we grew.

Hauling the dinghy onto the beach in Vanuatu.

Befriending a sailor-cum-eye-doctor in Germany.

A snow cone for lunch in the glacial mountains of New Zealand’s South Island.

Pulling in fish in the Pacific.

Sailing with armed guard through the Gulf of Aden, off the Yemeni coast.

Alexander at soccer practice in the Canaries.

Aylin running through the main square in A Coruna, Spain.

We lived quite conventional lives before we left.  The trip was absolutely unconventional, and we grew from it.  We gained a deeper appreciation for the manner in which we are all connected, both in terms of geographic proximity and shared migratory history.  One gets a sense, in sailing from the U.S. to New Zealand, how they are at once very far apart and quite closely connected. 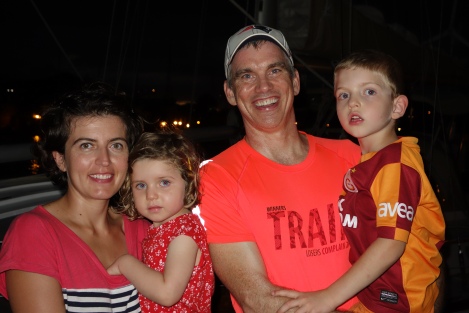 The trip around complete, this was taken moments after stepping ashore after crossing the Atlantic.  Look at those smiles on mom and dad!

We are now returned and have re-engaged with our prior lives and careers.  That has been an interesting process.  Both of us were able to jump back into work quickly — Sima as a consultant and Paul as an attorney — and we find that we were both able to turn on the jets again, to work hard in the pursuit of our careers.  That is attributable in part to the fact that we never stopped working, really.  The blog is replete with stories of difficult passages, challenging repairs, and cross-border logistical headaches.

Leander at anchor in Sweden.

More than once folks have remarked, “Wow — you’ve created memories to last a lifetime!”  That’s true, for sure, but underneath, it’s really the lifetime itself that matters.  We weren’t so much focused on building memories, as we were living life.  You only get one shot at it.