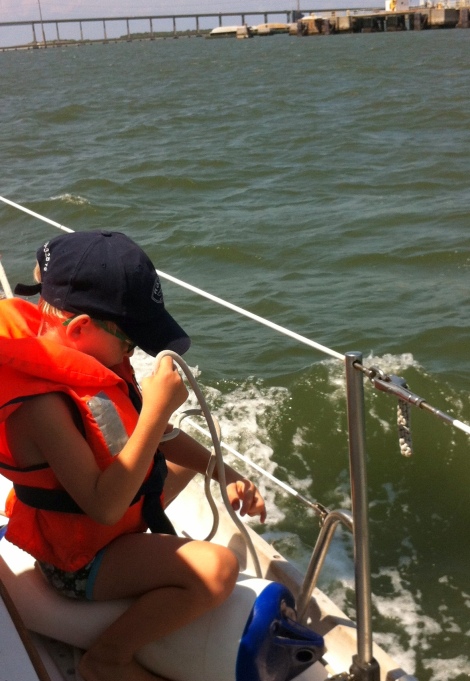 At mid-day on June 16, 2016, Leander is 25 miles southwest of Long Island, motoring under no wind and flat seas towards the Cape Cod Canal, some 98 miles due northeast. If the conditions hold, and we can keep our speed, we’ll enter the canal at about 4:30 a.m. tomorrow morning, Friday, June 17, and catch the middle of the tide that will allow us to pass through the canal from Buzzards Bay in the West to Cape Cod Bay in the East.

Our 4:30 a.m. arrival time at the mouth of the canal is not quite guaranteed. In general, ever since leaving Norfolk, VA, we’ve been moving through a very narrow weather window that is closing behind us as we race north. The weather is falling apart in our wake. At our origin in Norfolk, gale-like weather moves in today, with 25 knots out of the north and squalls to 50 knots. The line of demarcation was 40 degrees north, where we had to be by noon today. We’ve made that. North of that point, the winds are forecast to remain light through midnight tonight. But after that, they are to pick up from the northeast, the direction in which we are traveling. If the winds are moderate, we should make it to the canal in time. But if they are anything more than about 8 knots, we’ll be slowed considerably.

The currents in the canal run as much as five knots. And so if we miss the tidal window this morning, we’ll have to wait until late Friday afternoon to go through. With another 50 miles left after the canal to the North Shore of Boston, that means that we’ll be out at sea another night, and not home again until Saturday. So we’re hoping that the weather holds. And having been motoring now for nearly three days straight, we hope that the old Westerbeke engine is up to this last task as well. If it does, we may reach the North Shore by early afternoon tomorrow.

We’re glad to be getting home, but are melancholic about all the spots in the northeast we’ve had to race by. We have family or friends in North Carolina, Virginia, DC, Maryland, Pennsylvania, NJ, NYC, Connecticut, Rhode Island, and Boston itself that, with more time, it would have been wonderful to see, on a slow, rolling whistle-stop tour on our way home. But each such stop could have meant as another week at sea, per stop, as the weather windows for moving north open and close quickly.

June is a good time to be getting home.

But that raises another point. We are transitioning from our cruising lives into, what, the “after-life.” For the past year, since last summer, in Sweden, we’ve been able to plot one destination after the other, worrying about weather and currents and seas, making landfall, celebrating, relaxing for a bit (and sometimes longer than a bit), and then pushing on.

Now there’s no more pushing on. We’re not quite sure where to park the boat. Choice before were only temporary. If we didn’t like a spot, we could just pull up the anchor and move away.

We’ve long known there will be no one to welcome us to the dock, as we haven’t known, with the weather, when we’ll get to that dock, or even what dock that will be.
When we were in Sweden last year, we lamented to our friend Christian that we weren’t really sure where home was anymore. “Sure you do,” he said evenly. “You live in your home. It’s a boat. It just so happens that your home moves from place to place. And lucky you are for that.”

Christian had it right on.

So we’re coming home, in a way, but also leaving behind what has been our home, and way of life, for just short of nine years.

We have lots of tasks to accomplish now. A place to live. Schools for the kids. Resumption of careers. Details that are, in some ways, easier than sailing around the world, and in others, significantly more daunting.

But transitions and challenges are what keeps life’s journey interesting. So on we sail.

One response to “Home is where the boat is”