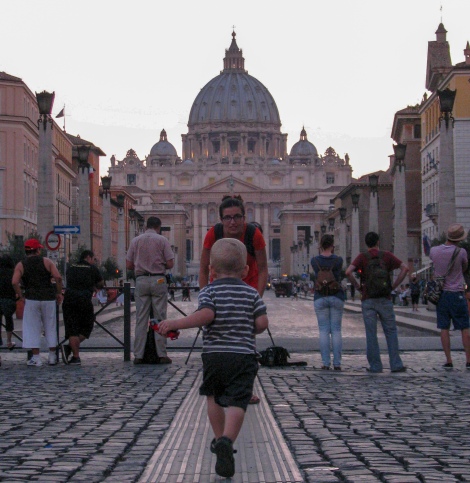 Alexander out for a run near St. Peter’s Square.

Leander toured through Italy in August.

We had passed through the Corinth Canal and entered the Ionian Sea in mid-July.  After visiting a handful of Greece’s Ionian islands, we then crossed the Ionian Sea to Italy at the end of the month.  It was our first overnight passage in more than a year, and one of only two we did all year.

We made landfall at Rocella Ionica, at the sole of Italy’s boot.  From there, we rounded the tip of the boot, and passed between Homer’s famed monster of Scylla and whirlpool Charybdis at the Strait of Messina.  Leander got pushed and pulled a little bit, but it only enhanced the experience, and we moved on into the Tyrrhenian Sea.

We made stops at a number of islands along the coast, saw Pompeii and Rome, and then sailed over the top of Corsica to France’s southern coast.

The sailing was mostly pleasant, with winds that were mostly favorable, if light and fickle. 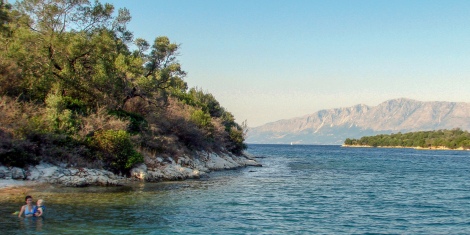 Still in the Ionian, we backed Leander right up against the beach at Meganisi, an inlet on the island of Lefkada. Sima and Alexander stepped off the back of the boat for a swim. 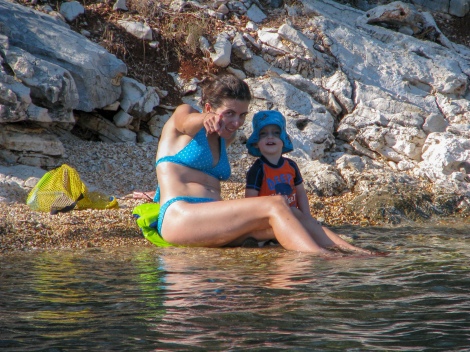 The vibrant colors in Lakka on the island of Paxos. It resembled a New England seaside village. Here, on Greece’s west coast, the influence of mainland Europe was striking. The colors stood in sharp contrast with the white-washed, blue-trimmed dwellings that we’d just left in the Aegean. 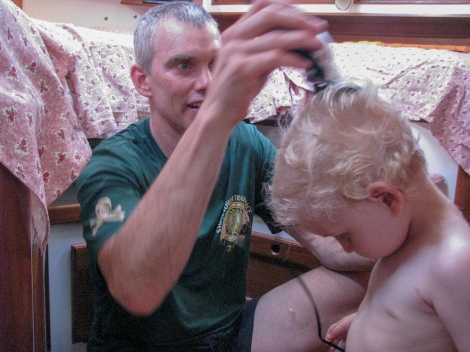 Weeding the garden! The summer heat called for a trim, which we did aboard with an electric razor. 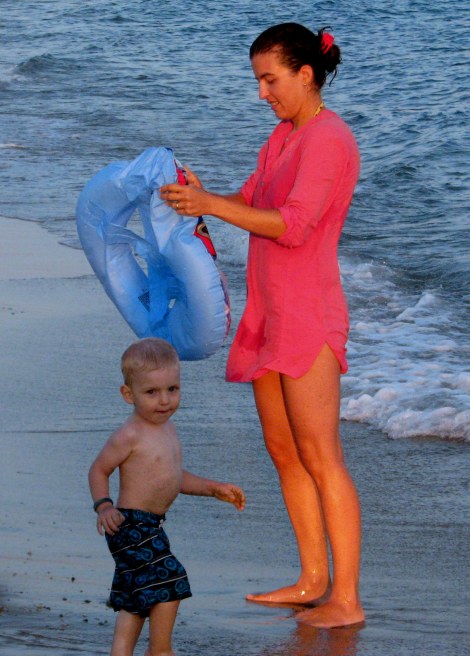 Italy!!!! Alexander and Sima at the beach near Rocella Ionica.

Mile after mile, Italy’s coast was packed with beach umbrellas and bathers. Nice for them, but it afforded little shelter for visiting sailboats.

Sailing north along Italy’s coast at the entrance to the Tyrrhenian Sea, we look back at Sicily. 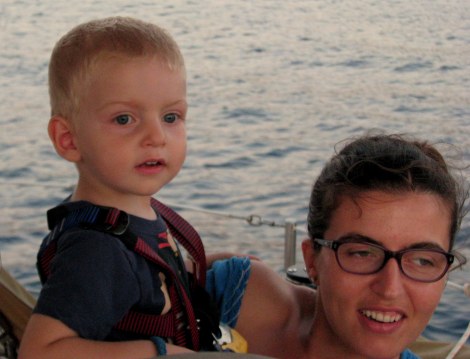 Alexander and Sima watch a passing ship. Alexander is wearing his harness, which is tethered to a u-bolt in the cockpit. The harness is designed for climbing, with shoulder, back, and leg straps. We find that it is much better suited for the job than the purpose-made boating harness for children that we had tested.

Cliff houses at Tropea, on Italy’s west coast. This was a typical approach to making use of Italy’s water-side cliffs. 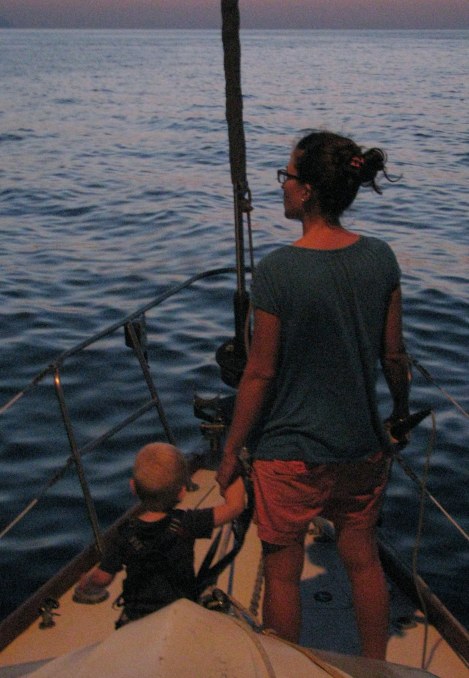 Alexander and Sima set the anchor just after sunset at Tropea.

Stromboli, an active volcano, blows off a little steam at sunset.

Paul’s family gathers in New Hampshire’s White Mountains each summer. We couldn’t be with them to do our annual climb of Mt Chocorua, but darn if this mountain that we passed on Italy’s west coast on the day of the climb wasn’t a reasonable facsimile of the real thing (see inset).

Greece’s Aegean islands sported windy roads that curved up and down the sides of rolling hills. It seemed as though the Italians, on the other hand, preferred a straight shot, as is pictured here. They build bridges across ravines and tunnels through the mountain sides. 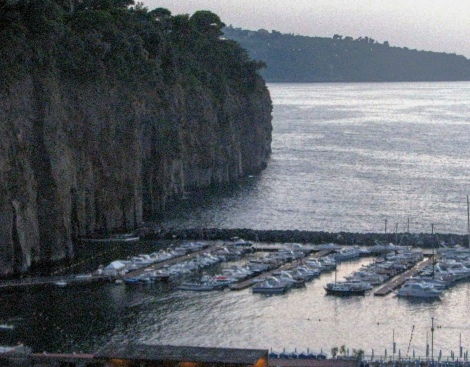 But when a steep road is needed, the Italians are second to none. To get to the town at Marina di Cassano Piano di Sorrento, and to our berth, pictured here, one drives a car back and forth along a cliff face that is higher than the one to the left. It was the steepest road we have ever seen.

The colorful, jumbled, and somewhat derelict houses at Cala di Cornicella, on the island of Procida, Italy. Soon after we dropped anchor, religious services started at the local church on a nearby hill. The Mass was broadcast over loud speakers that carried throughout the town. Most of the service was sung, quite beautifully, by a local choir.

At anchor in Ponza Harbor on the island of Ponza. The boats were packed in tighter than sardines. We arrived very late in the day, when hundreds of boats had filled the small anchorage. We took a space at the very back. We were told to be careful, as the space behind us was reserved to give the ferry sufficient turning radius. As can be seen, we did give it enough room, but just barely! 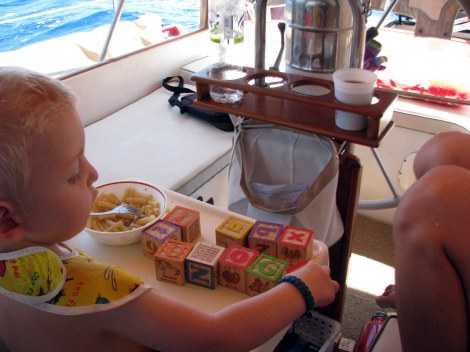 Multitasking Alexander eating lunch and playing with blocks at sea. After several days out, he now gets his sea legs, and has no problem with mal de mer. 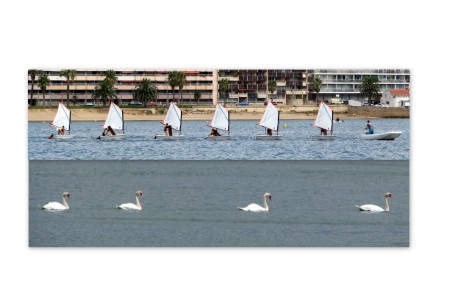 Man — or in this case, children — imitates nature. Above, dinghy sailors on the south coast of France insert their dagger boards, and below, swans parade on the Tiber River in Italy. 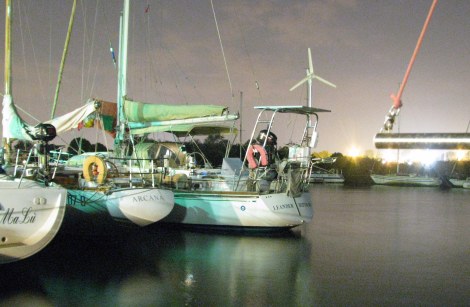 Leander rafted at night on the Tiber River, several miles downstream from Rome. 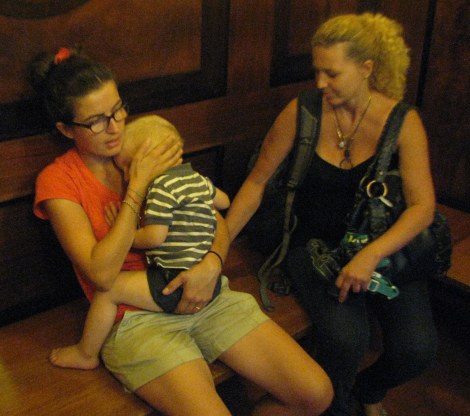 This is the biggest elevator we’ve ever been in, at the Vatican . With us is Angela, a baby sitter who helped watch Alexander so we could better enjoy the sights. Alexander still needed some “mommy-time” every now and then.

Under the watchful eyes of the Apostles, Alexander jumps from the dome of St. Peter’s Basilica. We had expected Rome to be like Athens, which we found crowded and unkempt. But it was no such thing. Huge open spaces housed enormous monuments. The highlight for us, not pictured here, were the Bernini sculptures at Rome’s Borghese Museum. We’ve seen nothing finer. 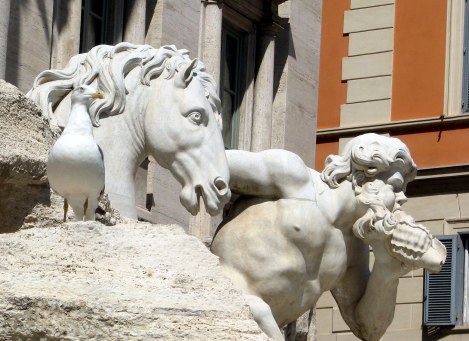 The Trevi Fountain. We couldn’t believe how life-like the sea gull appeared. 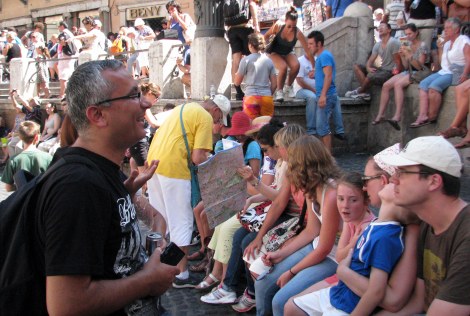 And the best part of Rome was that we had it all ourselves! Can you find Sima? She’s at the center, just behind the map. 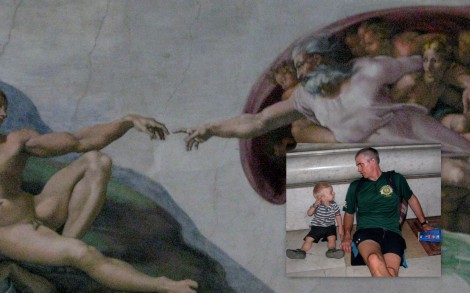 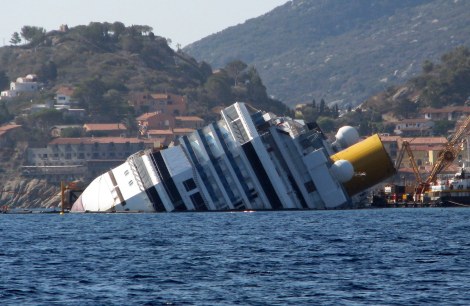 The Costa Concordia on its side off the island of Giglio. The captain had detoured to do a sort of “fly by” close to the island’s main town as a favor to the mayor. Not unlike the Titanic, the ship passed too close to a rock that seemed harmless, but which actually protruded underwater a good deal further than it appeared. It tore a long hole along the side of the ship, and she began to sink at once.

France!!!!! An ancient tower on the north of Corsica. 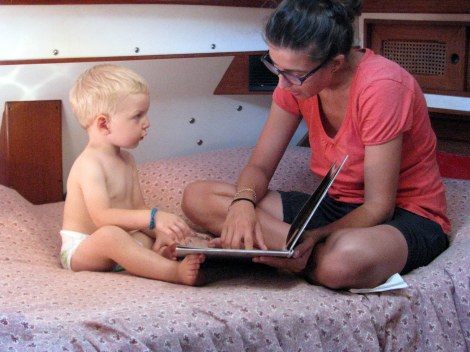 Sima and Alexander catch up on some reading.

For the first time in years, Leander found herself among other boats from “MA.” We didn’t have the heart to tell her that she wasn’t, after all, at home, as the initials stand for “Marseille,” not “Massachusetts.” 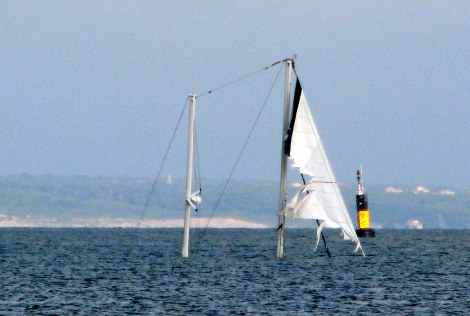 Arriving near the mouth of the Rhone, we gave a wider berth to a fringing sand bank than this boat had. 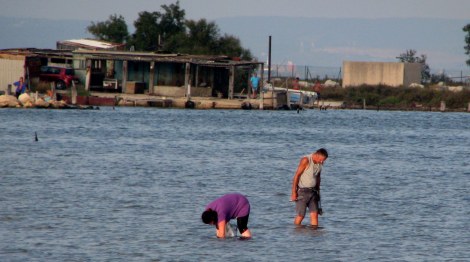 Fishing in the mud near Port St. Louis, France. 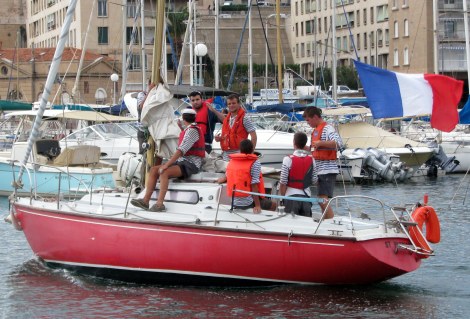 Sometimes, it was quite easy to tell that we were in Fwannnce.

2 responses to “Cruising Along the Italian Coast”