The church at Veneguera, Gran Canaria, at dusk on Christmas Day.

Getting into the holiday spirit is trickier in balmy weather.  The days are not short, dark, and cold, our usual cues for building Christmas cheer.  So we have to look elsewhere.

This year, rather than try to recreate all of our own traditions, we looked into how the Canarios celebrate.  The European model is followed for the most part.  The big family meal is on Christmas Eve, and folks are then out and about on Christmas Day.  Religious celebrations are important, with Catholicism being the only game in most towns.

Except for those involved in tourism and food, businesses close by mid-day on Christmas Eve.  Village streets are deserted by early afternoon, as families begin to gather.  Fish and vegetables, not turkey and stuffing, grace the table.  Locally-made confections complete the meal.

Gifts are not exchanged until January 6, “El Dia De Los Tres Reyes Magos,” our “Little Christmas” in the U.S.  That makes sense, no, to give presents on the day that the Magi supposedly arrived bearing gifts of their own? On January 5, the Three Kings can be found parading through many of the villages, and local children are encouraged to approach them with the their wish-lists.

With that program in mind, we sought to play along as much as possible, albeit recognizing that there was no way that Alexander could be put off Santa Claus until January 6!

On Christmas Eve, we dined at Dennehy’s Marina, a local restaurant run by an emigrant family from Ireland.  (Billy Dennehy has been a great help to us in securing replacement propane for our non-conforming U.S.-styled propane tanks. )  That spared the need to spend most of Christmas Eve in the kitchen, a task that falls most heavily upon Sima.

Sima steals a kiss from Aylin at dinner.

Alexander didn’t last much past the entrees. Aylin was out soon after. 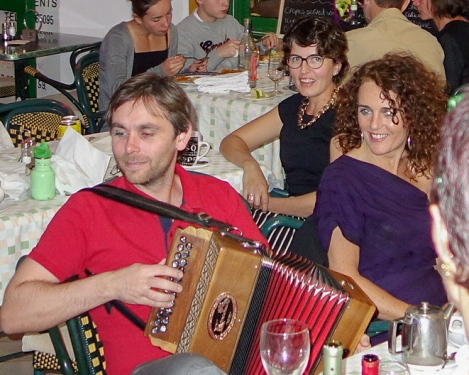 One of the risks of dining with the Irish on a holiday.  Don’t be at all surprised when melodeons and fiddles suddenly appear from boxes stashed under seats.  And expect that the fellow with whom you were having a pleasant dinner chat will be a baritone who belts out a mean version of “Isle of Innisfree” as coffee is being served.

Christmas morning, and the kids are ready to go.  On Leander, the stockings are hung by “the radio with care,” and Santa comes down the mast. “It’s too small!” you say?  Let’s see any normal-sized pixie squeeze  down a chimney, let alone an overweight, snow-booted, beard-sporting, cookie-eating, fellow clad in a full winter’s suit.

It was an enjoyable Christmas morning.

We were told that nearby Veneguera celebrates Christmas Day with particular gusto, repeating customs and practices that have been carried on in the village for years.  It was to start with Mass at 5:30 p.m, and so we packed up the kids and took the half-hour drive up into the mountains.

Inside the church, many of the locals were dressed in outfits that their ancestors wore a century ago.  A family dressed as Jesus, Mary, and Joseph were the guests of honor.  The roles are played by a different family each year, with the critical qualifying requirement being the possession of a new born child. 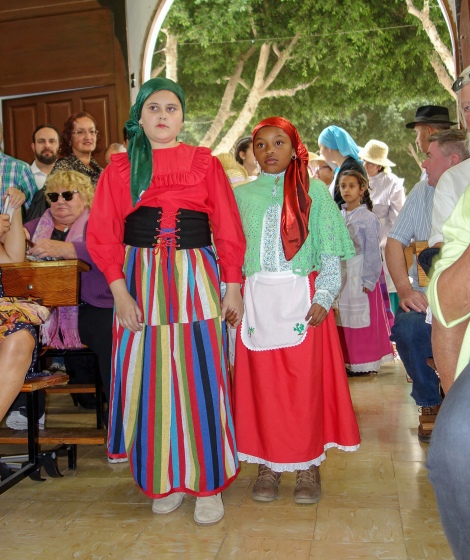 The altar, crowded with townsfolk in period costumes, with the family portraying Jesus, Mary, and Joseph, seated at right.

After mass, crowds gathered in the square to watch a procession from the church through town to some nearby fields.

An instant after this picture was taken of Jesus, Mary, and Joseph, the donkey got spooked and begun to buck and run.  Several men ran the animal down and pulled Mary and Baby Jesus off as the animal sprinted away.  The rest of the walk was done afoot.

Whirling dancers were led by dozens of accompanying musicians.  The music was soft and pleasant on the ear.

This was all great.  We had been told by another boatie who’d been here before  that the Mass was the “big highlight,”  and that everything that followed was rather anti-climatic.  Boy, was that off the mark!

This was all great.  We had been told by another boatie who’d been here before  that the Mass was the “big highlight,”  and that everything that followed was rather anti-climatic.  Boy, was that off the mark!

The mass was no doubt worthwhile, but it paled in comparison to the pageantry of the procession, and this was all small potatoes to what lay in store after that.

The parade route terminates on what can best be described as a sort of working fair ground, nestled among the steep some hills on the outskirts of town.  The townsfolk  from Veneguera, joined by many others from the surrounding towns, had recreated life in their village from yesteryear on a massive scale, with dozens of mini-stations along  twisting path showing off their trades and other ways of life.

Bed was baked on site in an outdoor oven. 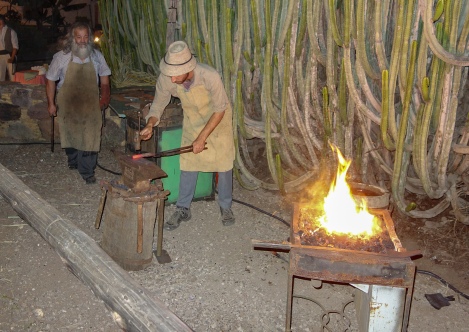 Blacksmiths bang out some horseshoes.

Tomatoes are picked, and the four that were given to us complimented our salad the next day.

An ox team plows a field.  The spots? Ever take a picture in a snowstorm, and the flash reflects off of the flakes?  The Canaries are due west of Africa. When the wind blows from that direction, desert sands are picked up and borne in the wind.  Gran Canaria can be submerged under a hazy cloud of dust. Some visitors wore dust masks. 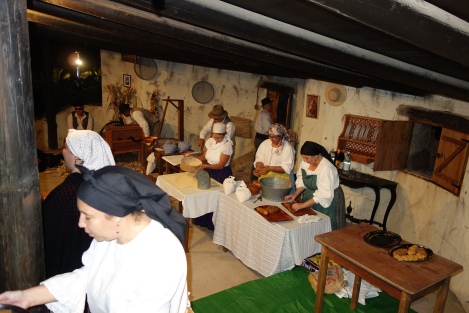 Food was everywhere.  We tasted breads, sweets, juices, cheeses, goat-milk confections, chocolate drinks, and local alcoholic beverages.  There was no charge for entry, but instead large jug into which voluntary donations could be made upon leaving the fair.

At the end of our route, some local wine and sausage to send us on our way.

We were very much in a holiday spirit by the end of the day.  We ate well, yucked it up with locals, and hung out with some newly-made Irish friends, Kevin and Deidre, two of our dinner companions/musician friends from our Christmas Eve dinner.  The kids really took to Deidre in particular.

The fair was Disney-like, without the artificial flavoring.  The displays were made richer by the fact that the locals were keeping alive their own traditions, rather than merely play-acting something that they had read about in books.  They have done this once a  year, for thirty years, on Christmas Day only. Outstanding.