We wanted to get Alexander’s picture against the backdrop of the rocks. So Paul called his name. Alexander heard it as Paul’s “you shouldn’t be doing that” voice, and stopped, literally, in his tracks.

Alexander fishing at sunset. We are on the island of Kalvo, on Sweden’s west coast. No fish were caught this evening. And though it sure LOOKS like a pleasant end-of-the-day, Alexander and I forgot bug spray, and so we were soon battling battalions of mosquitoes!

Kalvo is the middle of three small, connected islands, joined to neighboring Lindon and Trosso. Here we walk along the “main” road, which runs down the spine of the three islands. You know you’re off the beaten path, literally and figuratively, when the main road is a well-manicured grass lawn.

On Kalvo, the gnarliest tree that we’d ever encountered. It’s almost as if someone kept changing “up” for the poor, twisted fellow.

Paul’s good friend, Peter Andersson, came to join us for a few days. Paul and Peter were high school classmates when Paul was an exchange student to Sweden. We were supposed to travel from Kalvo to the nearby Swedish mainland to pick up Peter, but we had some engine trouble.  Maybe we could have sailed to meet him, but with the narrow spaces and shifting winds about these small islands, we thought not to try it without the engine available as an emergency backup. So we unpacked the dinghy and its engine for the first time in a year, and Paul and Alexander traveled a mile under darkening skies to get Peter. Peter is here safely aboard, and his getting Alexander started on a hobby that Peter shared with Paul in high school.  Peter can solve the cube.  Not impressed?  How about the fact that he can do it in less than ten minutes?  Still not enough?  OK, how about the fact that he does it in this time after looking at it once and then blindfolding himself?  Now that’s something.

We couldn’t start Leander’s engine the next day either, and we eventually used the dinghy to tow her to Halvstensund on the mainland.  (We soon found the problem though, a loose grounding cable.)  From Halvenstensund, with Peter’s car to use, we explored some of the sights on the coast. This rock carving at nearby Vitlycke, called “The Wedding Couple,” dates to about 1000 BC. The waist-high protrusions aren’t phallic. Many of the other carvings had the same element, and they appear to be swords or some sort of ceremonial add-on.

Fisherman Alexander at it again, this time while Leander is underway, sailing south among the islands on the coast.

Alexander having a quiet moment at the end of the day in Fjallbacka.

Aylin makes a friend. We struck up a conversation with Kare at the supermarket one day, and invited him to the boat. He took us upon the invite, and we shared a cup of tea and stories of the sea. Kare was a mariner who had been injured many years before working in Norway, and he shared some of his stories with us.

Here, Sima, Alexander, and Aylin move through Kungsklyften (“the King’s Wedges”) , in Fjallbacka. Not one but three separate stones have chosen this narrow crevice in which to wedge themselves, providing a natural ceiling and great photo opp for passing hikers. 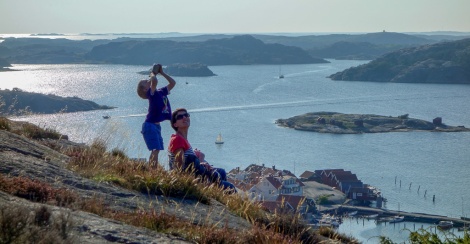 Alexander re-hydrates, and Aylin, tucked into Sima’s lap, does too, at Fjallbacka. Ingrid Bergman lived here and her ashes are scattered on one of the islands. 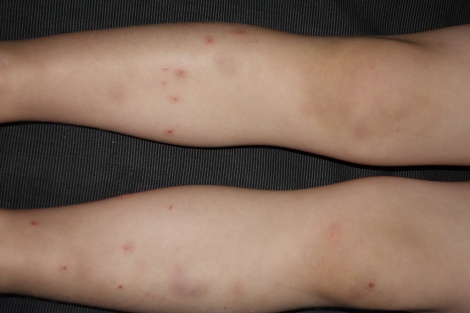 A family self portrait at sunset on Smogen. 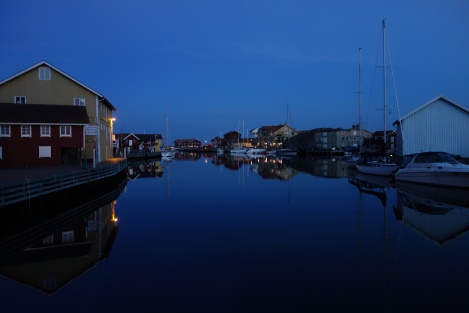 Nightfall at Smogen. This area is called “Smogen Brygge,” or Smogen Walk, and is the center of the more well-known summer retreats in Sweden. The boardwalk continues around on both sides of the long inlet. The picturesque structures are built on sheer granite ledge, and mask the fact that this part of Smogen is nothing but rock. 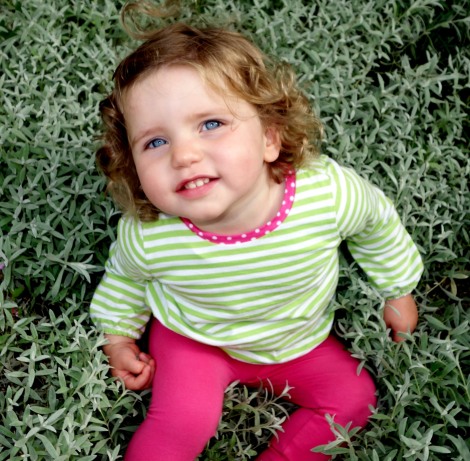 Aylin at play in some ferns. OK, she’s not at play. The photo was posed. And on the 36th attempt, when she finally stopped squawking about being put down in some weeds, stopped reaching for the camera, opened her eyes, and put a smile on her face, a nice photo was had.

Jan Torgny and Kristina Grahl, friends from Smogen. Kristina was one of the first friends that we met on the island, and she took us under her wing. Through her, we met a number of good friends at Mission Kyrka.

We left the boat for a few days, got a car, and went to Stockholm. There we caught up with Bo, and his girlfriend, Nina. Bo became a good friend of Paul’s when Bo was studying in Boston in the early 90s.  Paul and Nina, in turn, were going to law school together then, and met through Paul at a Halloween party.

We met up with Peter and another of Paul’s old friends, Erik Arkstedt, at a pub downtown. Peter can get people laughing! 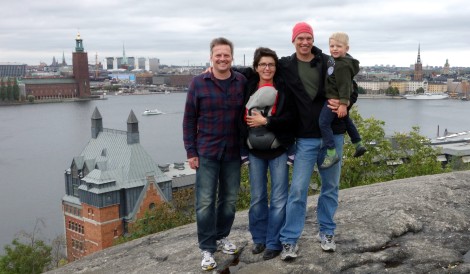 A group shot in front of the Radhuset.

The Swedes know how to do things just right. Here is a birthday celebration for two of Paul’s friends, Asa and Henrik. They both turned fifty at about the same time as their 25th wedding anniversary, and got many of their friends together for a “125-year” celebration. That’s Sima at the lower left, with Aylin in her lap, and Peter Andersson two up from her, leaning back, and Erik Arkstedt and his then fiance, Pia (now wife), just across from Peter. Pictures of their friends floated on the screen for a good part of the night. Here, photos of Peter, left, and Erik, top right, from days gone by.

We then took the ferry out to Gotland. Paul lived there with his host family when he was there in the 1980s, and his host brother, Tobias Lundgren, still lives in the summer home Paul came to many years ago. We’re returning home after a walk among the neighboring farms. 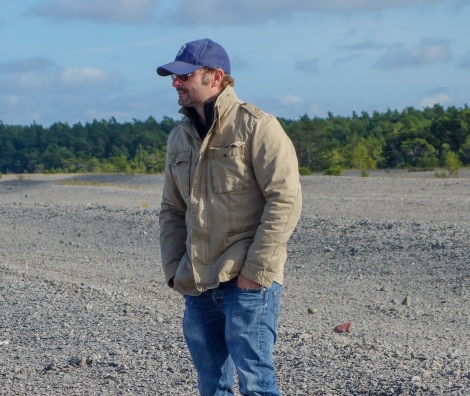 Tobias during a pensive moment at the beach in Gotland.

Tobias, Alexander, and Sima having lunch at the beach.

Abandoned dories on the beach on Gotland. 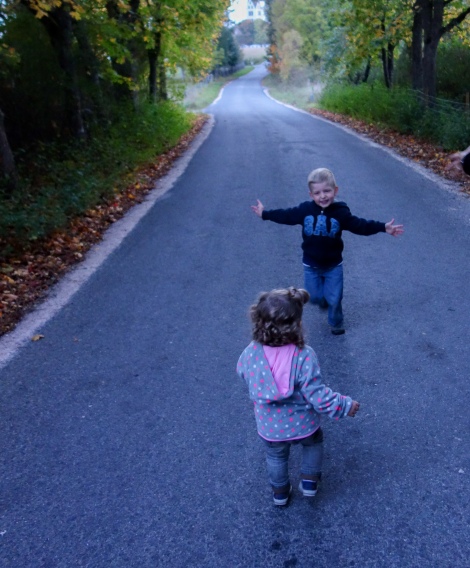 Alexander and Aylin on the road on which Paul used to do his evening runs as a 16 year-old. Nothing seems to have changed. 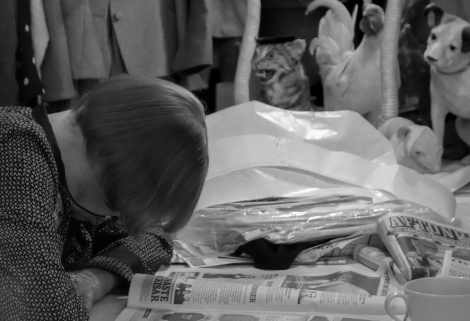 Back in Stockholm, peaking into a shop window. The proprietor takes a cat nap. The cat, in the background, guffaws, and the dogs looks on quizzically.

On the drive back to Smogen.  Sima and the kids have now gone back to Turkey while Paul mothballs the boat for the winter.  Here, along the road, the Swedish countryside can be breathtaking. 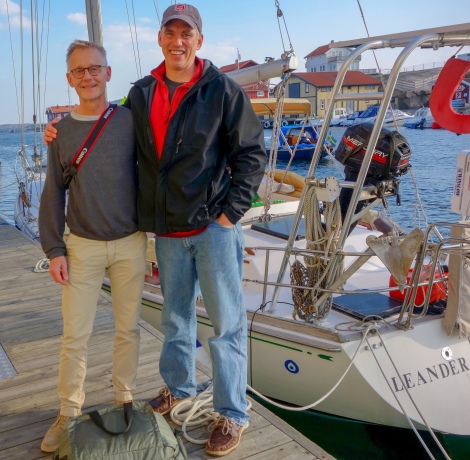 Paul and Erik at Smogen. Erik drove five hours from Stockholm, helped Paul with boat tasks, and then treated Paul to a brunch of Smogen toast. It was a wonderful day. 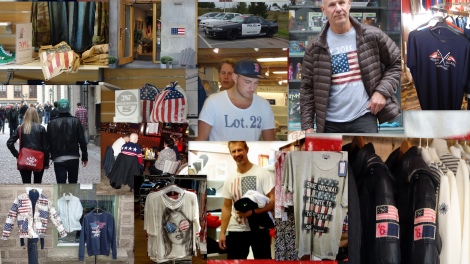 This is a collage that Paul made, the pictures all taken within a few days of each other on the streets of Stockholm and Smogen. Swedes can’t get enough of brand “U.S.” Red Sox Caps, Celtics caps, U.S. flags on this, “Rhode Island Sailing Club” on that. It isn’t like an affection for all things foreign, either. For every ten U.S. related items, there would be one item from all the other countries of the world combined.

We found the perfect place to store the boat for the winter, at Smogen Varvet on Smogen. Anders Abrahamsson, pictured here with Paul, and his family are the proprietors. Anders circumnavigated himself when he was younger and understands implicitly the life we need. Not only are the Abrahamssons friendly folk with deep knowledge about boats and their upkeep, they invite us to their “fika” (a gathering for coffee) each day at 3:00 p.m. , which serves as the perfect afternoon break. 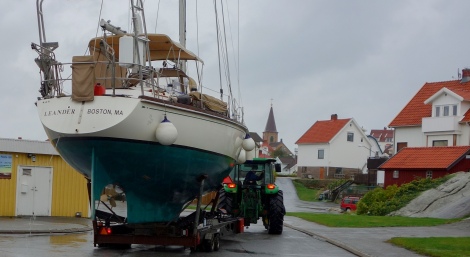 Leander going away for the winter. From the Galapagos to Pirate Alley to 1000 feet high in the French canals to the roadways of Sweden, she’s been around.

These are the Sporrongs. They have become wonderful friends on Smogen. Christian played football in Sweden during the fledgling days of the sport there, and he and Paul love to talk shop and, in season, take in the odd NFL game carried on Swedish TV. Christian’s wife Annemaj is to the right, and young Linnèa is in the carriage to the far right, while older brothers Hjalmar and Albin are helmeted.